Yup . . D.C. Property Lines . .  Do you know why these boundary stones were placed around the 10 mile square property line of Washington D.C.  ?

Read what it says on both sides of these Boundary Stones

Any questions about their significance now?

Yes . . that is the Federal Boundary Line  😀
. . the limit of Federal Jurisdiction 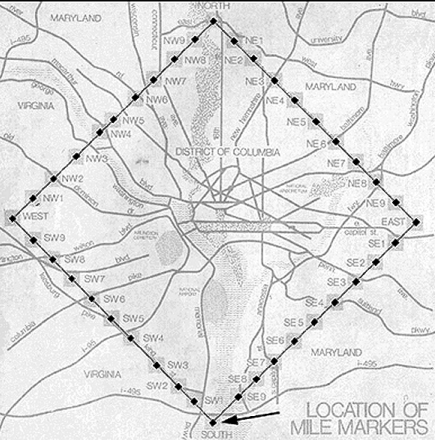 What is a Boundary?

John Myser’s going to court again today, Wed Jan 22, to further expose the fraud that there is no such thing as a person. He’s done a marvelous work so far and YOU have an opportunity to meet him today and watch him in court at 1pm.

Please . . show up and support my friend John, you won’t be disappointed.
The hearing will be at 1pm at:

The content of John’s defense is best described by yesterday’s email to the County Sheriff:

I will be speaking in exactly the same manner as last time when the Bar Attorney Judge Vraa ruled I FTA’ed (failed to appear) in court while she looked at me.

Bar Attorney Ron Hocevar stated the reason she could FTA me was I didn’t understand the word “represent” myself in court when I spoke to her.

Oh yes I do understand the word…  I asked you sir; re-present myself as what in court?

I know what the words: “Appear, Appearance, Represent” and what they mean. They do not mean what you think or have been led to believe by Bar Attorneys.

I also know the difference between a man and a person, one is real and the other is a fiction.  The Bar attorneys know a person is a fictional entity and I can prove it with their own words in court cases from the year 1658 to 2020, 372 years, where Bar attorneys define their use of the term PERSON in court cases and take over 200 pages to define just that word PERSON!  Never once do they define a Person as a Man or a Woman in 372 years.  Yet you thought you were a Person.

I am exposing a fraud by speaking the truth and the Bar attorneys (judge and prosecutor) are trying to cover it up with lies and to shut me up-75 days in jail for a traffic ticket. Many of your own deputies, who took me into custody that day, shook their heads in disbelief, saying this type of infraction only ever gets a 100-200 dollar fine. Tomorrow the fine is only $200 if the Bar attorney proves his case.  Putting a man in cage for 75 days is cruel and unusual punishment for a traffic ticket worth $200.

I am always polite and respectful of my fellow man or woman, even when I have been abused and your deputies are misused against me by Bar Attorneys.

If you recall our previous conversation about my grave concern, Jeannie Anderson, Assist Scott County Bar Attorney, who called your deputy in advance to intimidate me in a public meeting as I spoke politely during a citizens hearing on property taxes.  You assured me it wouldn’t happen again.

I have always respected you and your deputies and my fellow man or woman.

I would like some protection in court today as I take an oath and expose this fraudulent word play game and two beings (one real and one fictional) both with the exact same name, used to deceive and to harm me.

Today, I get more than 5 minutes (public comment) to expose the deceit with truth.

Here’s a 5 min clip of John Myser explaining the “Sin of Origin” to the Scott County Commissioners during the public comment section.
These Public Hearings are typically broadcast on the Counties Public Access channel and will loop thru several times a week til the next meeting begins to broadcast the following month.
As of 2016, there were 3,007 counties, 64 parishes, 19 organized boroughs, 10 census areas, 41 independent cities, and the District of Columbia for a total of 3,142 counties and county-equivalents in the 50 states and District of Columbia.
How much faster would things change if we showed up at those monthly meetings to make public comments like the ones John has made over the last 3 years. 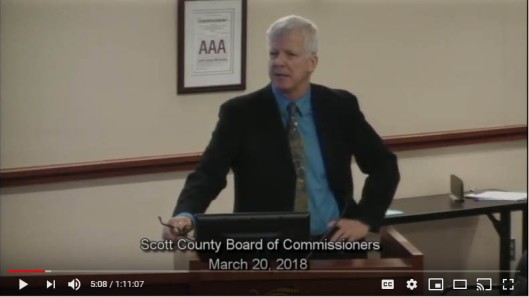 Learn more about John Myser, his story, his work etc …