Why is it that the Government expects a Jury to hold us accountable to hundreds of thousands of pages of ‘”THEIR”‘ Codes, Statutes and Ordinances which are written in the foreign language of “Legalese” as soon as we get out of School when Government schools do NOT teach the foundations or doctrines of law ?

. . . . to make YOU, easy pickings for the Government
YOU, are the Cash Cow, and the more ignorant you are, the better

Heaven forbid you should ever figure out you are an “idiot” (literally “private person” as opposed to one taking part in public affairs) and not subject to THEIR private Corporate regulations without YOUR consent, . . . and that you have a right to “face your accuser” (Acts 25:16), . . . and that there must be verifiable damages incurred by the accuser for a case or trespass to even exist.

The unanimous Declaration of the thirteen united States of America

We hold these truths to be self-evident, that all men are created equal, that they are endowed by their Creator with certain unalienable Rights, that among these are Life, Liberty and the pursuit of Happiness.–That to secure these rights, Governments are instituted among Men, deriving their just powers from the consent of the governed, –That whenever any Form of Government becomes destructive of these ends, it is the Right of the People to alter or to abolish it, and to institute new Government, laying its foundation on such principles and organizing its powers in such form, as to them shall seem most likely to effect their Safety and Happiness.

Here’s an example of what THEY would teach if Education was actually THEIR goal.

Click HERE to read the Dred Scott case wherein “Common Law” is mentioned 11 times, “Immunity” is mentioned 45 times, “the several States” is mentioned 61 times, as is the 7th Amendment and so much more.

If Our children do not know the relevance of these things, then We have failed to secure for them a proper Education.

Campaign Finance Reform?  Is a Corporation, controlled by foreign investors, a “Foreign Power” as described in the 1812 ORIGINAL 13th Amendment? 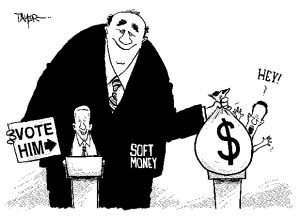 Is that why the 13th Amendment disappeared after 60 years of being published as Law?

Was the Civil War used as a “False Flag” event? 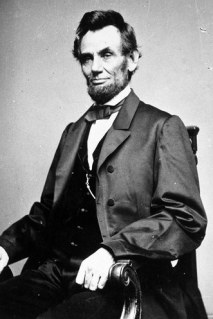 Could Lincoln have ended Slavery with an Executive Order?
What was the war really about?

The 1812 ORIGINAL 13th Amendment:
“If any citizen of the United States shall accept, claim, receive or retain, any title of nobility or honour, or shall, without the consent of Congress, accept and retain any present, pension, office or emolument of any kind whatever, from any emperor, king, prince or foreign power, such person shall cease to be a citizen of the United States, and shall be incapable of holding any office of trust or profit under them, or either of them.“

To Clarify: “If any citizen … shall … accept and retain any present … of any kind whatever, from any … foreign power, such person shall cease to be a citizen of the United States, and shall be incapable of holding any office … “

Why were hundreds of books written about something that supposedly never happened? Click HERE to see all those Google Books results.

WASHINGTON, DC – JANUARY 21: Attendees hold signs as they listen to speakers during a rally calling for an end to corporate money in politics and to mark the fifth anniversary of the Supreme Court’s Citizens United decision, at Lafayette Square near the White House, January 21, 2015 in Washington, DC. Wednesday is the fifth anniversary of the landmark ruling, which paved the way for additional campaign money from corporations, unions and other interests and prevented the government from setting limits on corporate political spending. (Photo by Drew Angerer/Getty Images)

The 1812 ORIGINAL/missing 13th Amendment to the Constitution for the United States of America was fully Ratified in December 1812 upon the New~Hampshire Legislature’s approval it. It was published in hundreds of articles and law books for another 60 years and then Vanished without a trace.

If any citizen of the United States shall accept, claim, receive or retain, any title of nobility or honour, or shall, without the consent of Congress, accept and retain any present, pension, office or emolument of any kind whatever, from any emperor, king, prince or foreign power, such person shall cease to be a citizen of the United States, and shall be incapable of holding any office of trust or profit under them, or either of them.

The Screenshot below is of the

Click ON the Screenshot to see it on Google Books

I believe from the sheer amount of Volume in the printing of this Amendment for 60 years in Various Law books, that it most certainly ratified dispute the supposed “missing papers” from Virginia.

Other than the unearthing of the original letters sent from Virginia to the rest of the States tell of Virginia’s ratification of the 13th, the most telling evidence of it’s ratification would come in the form of 13th Amendment Case Law from various Courts from 1812 to the early 1860’s.
I would like to see pressure put on “The People of the Commonwealth of Virginia” to produce the original evidence of it’s ratification or denial thereof as well as it’s 1811 letters to the other States Legislatures indicating Virginia’s position on this amendment.
The controversy began to brew when Esquire John Quincy Adams’ cleverly reported to the US Congress in 1818, a vague representation of Virginia’s ratification (item 17 below) process which had been more exhaustive than both Connecticut’s (item 15) and South Carolina’s (item 16).
Whereas John Quincy Adams’ citizenship and livelihood as an Esquire where in jeopardy, it’s easy to see how so many of the original Virginia evidence found in the minutes of State’s such New~Hampshire’s Journals of the House of Representative for June 1813 . . was ignored.

If Esquire John Quincy Adams’ 1818 report (seen below) was conclusive, then why did the United States include the Original 13th in their 1825 Army Field Manual of the Laws of the United States? 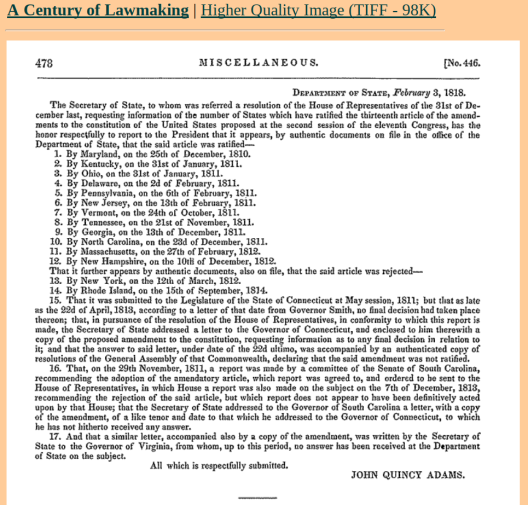 CLICK HERE to see to overabundance of Law Books on Google that were printed with this amendment intact for over 60 years.

Pictured below are some of the book that can be found at the Connecticut State Repository which contain the Missing 13th Amendment. 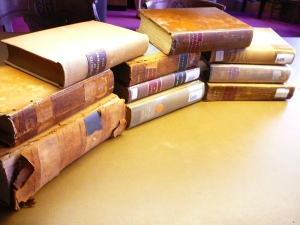 The following PDF’s are of the Certified Copies taken from those books pictured above. Connecticut, Massachusetts, Virginia, Ohio, Missouri, Iowa, Kansas